It is about 24 hours since the announcement of the sudden death of President John Atta Mills of Ghana. The news was received across Ghana with shock and grief – as of a family member. The state’s constitutional wheel of response to such an emergency moved in sync with all the sensitivity and subtlety in observance. Vice-president John Dramani Mahama, a writer and historian, has since been sworn in by the chief justice as new president in a dignified ceremony. All the while, no tanks have moved from some base to another nor has anyone seen an armoured personnel carrier gatecrashing through some barricade. No sermons have been preached by anyone from anywhere for anyone to murder anybody. No news has been broadcast by any radio or television station or newspaper or on the internet or any other media asking anyone to murder someone or any people or peoples. On the contrary, Ghana gets on with life in a mood reflective of poise, dignity and compassion. 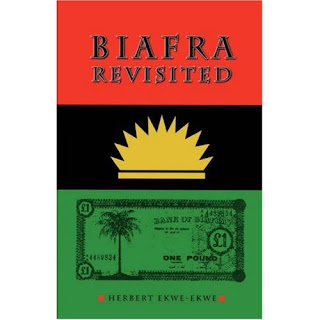 Forty years after the onset of the 1966-1970 Igbo genocide, the foundational genocide of post-(European)conquest Africa, Herbert Ekwe-Ekwe returns to the subject on which he published two seminal books in 1990. In Biafra Revisited, Ekwe-Ekwe demonstrates that the Biafra War (1967-1970) is the second phase of the Igbo genocide after the initial massacre of 100,000 Igbo people across the principal towns and cities and villages across north Nigeria and elsewhere in the country between May and September 1966. The slaughter was organised and carefully coordinated by the Nigeria state and its leading institutions – the military, police, religious, academic, media, business. In Biafra, 3 million Igbo or a quarter of this nation’s population were annihilated within 30 months. This is a holocaust of unprecedented proportions in recent African history. The study shows that the British government of the day fully supported this devastating stretch of genocide militarily, politically and diplomatically. On this, Ekwe-Ekwe insists: “It is evident that this genocide, the worst in 20th century Africa, would probably not have occurred without the active support that the perpetrators received directly from the British government … As a result, Britain, crucially, has played a key role in the emergence of the ongoing age of pestilence ravaging Africa” (emphasis in the original). The author contends that Nigeria is a failed state that does not serve the interests of the constituent peoples, a failure which, pointedly, occurred in 1945 under the “very watch of the British occupation regime” when the Igbo immigrant population in Jos (north Nigeria) were subjected to a harrowing pogrom organised by Hausa-Fulani (north) regional leaders, the much coveted British political allies opposed to the restoration of African independence. The British did not prosecute any of those responsible for the Jos massacre. This pogrom and another carried out once again against the Igbo, this time in Kano (north Nigeria) in 1953, became “dress rehearsals” for the 1966-1970 genocide.

Nigeria has now run the course of its bloody trail in this history. The greatest challenge currently facing the Igbo and other oppressed nations in Nigeria, Ekwe-Ekwe concludes this major study, is to negotiate the formal and orderly dissolution of this state and embark on the creation of democratic and extensively decentralised new states that guarantee and safeguard lives, human rights, equality and freedom for all peoples and individuals.

Biafra Revisited is also available from 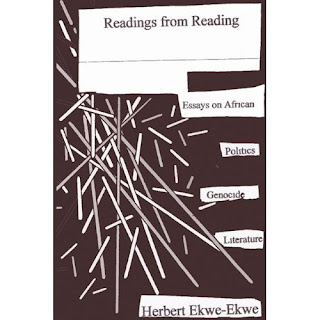 The essays here in Readings from Reading underscore Herbert Ekwe-Ekwe’s continuing optimism about the possibilities of Africans constructing post-“Berlin-states” as the launch pad to transform the topography of the African renaissance. Readings from Reading is a timely publication, coming on the eve of the historic January 2011 referendum in south Sudan in which the people of the region will choose to vote to restore their national independence or get stuck hopelessly in the Sudan, the first of the “Berlin-states” that Africans tragically “inherited” in January 1956. Ekwe-Ekwe insists that the contemporary Africa state, imposed on Africans by a band of European conqueror-states and currently run by what the author describes as a “shard of disreputable African regimes to exploit and despoil the continent’s human and material resources”, cannot serve African interests. The legacy, as this study demonstrates, has indeed been catastrophic: “The [African] overseers pushed the states into even deeper depths of genocidal and kakistocratic notoriety in the past 54 years as the grim examples of particularly Nigeria, the Democratic Republic of the Congo and the Sudan ... depressingly underscore. 15 million Africans have been murdered by African-led regimes in these states and elsewhere in Africa since the Igbo genocide of 1966-1970”. Ekwe-Ekwe argues that there is no future for African progress, especially in ensuring that the peoples, themselves, exercise an unfettered self-governing ability to develop their lives, reconstruct centuries of a battered heritage and transform their societies, except Africans dismantle the “Berlin-state” on the continent. This state remains a conqueror’s/conquest principality as its original creators have indeed sought and reinforced unrelentingly and cannot, therefore, respect not to talk of safeguard the human rights of African peoples. On the contrary, the future for Africans predicates on an extensive sociopolitical decentralisation process where constituent nations, however “small”, exercise their inalienable right to control and develop their human and natural resources and decide, freely, on the nature of the relationship that they wish to establish with their neighbours and those elsewhere in the world.

Readings from Reading is an engaging, incisive, wide-ranging and multidisciplinary discourse, salient features that have come to define Ekwe-Ekwe’s groundbreaking scholarship of the past three decades. The author covers an assemblage of diverse topics and themes which include the Igbo genocide, the Jos massacres in central Nigeria, Umar Farouk Abdul Mutallab’s failed attempt to blow up an incoming aircraft over Detroit on Christmas Day 2009, African presence in Britain, Robert Mugabe, Muammar Gaddafi, Obafemi Awolowo, Omar al-Bashir, Yoweri Museveni, Charles Taylor, Olusegun Obasanjo, Ali Mazrui, Andrew Young, the G8 and Africa, Africa “debt”, African émigrés’ remittances to Africa, “sub-Sahara Africa”, reparations to Africans, African representation on the UN Security Council, African choices for the Nobel Peace Prize, Africa and the International Criminal Court, Nigeria, Côte d’Ivoire, Kenya, the Sudan and the Congo, arms to Africa, arms-ban on Africa. Finally, on the subject of the restoration-of-independence, the key connecting thread that links all the visitations, Ekwe-Ekwe critically examines the contributions made variously on this cord by an impressive line up of some of the very best and brightest of African intellectuals: Achebe, Adichie, Césaire, Damas, Coltrane, Diop, Equiano, Ngũgĩ, Okigbo, Senghor.

Readings from Reading is also available from

Posted by Herbert Ekwe-Ekwe at 04:16 No comments:

When last in March 2010 I reviewed the Washington-based Fund for Peace’s annual research publication, “The Failed States Index”
(http://rethinkingafrica.blogspot.co.uk/2010/03/jos-foregrounding-failed-state.html), the fund concluded that
11 out of the “worst 20 states” in the world (in 2009) were located in Africa. I had shown that Nigeria, one of the eleven, had indeed been a failed state since 1945. For the outcome of the FfP’s current, 2011 research, published recently, the highlights for Africa are as follows: 14 out of the “worst 20 states”; 20 out of the “worst 30 states”; 28 (just above one-half of all the continent’s so-called sovereign states) of the “worst 53 states”. It is not inconceivable, at this rate, that by the time students finishing high school this year graduate from colleges and universities and begin to apply for research positions at the fund, “53 out of the worst 53 states” in the world could be in Africa.

African countries, unsurprisingly, fare most poorly at each and across the ten crucial variables at the centre of the fund’s research, but particularly in the following, with the inescapable crushing consequences on the lives and well-being of the peoples:

1. legitimacy of the state

Yet, according to trade figures and associated data readily obtainable, these principalities of seeming dysfunction have performed their utmost, year in, year out, in that key variable for which their creators established them in the first place – curiously, in no way part of the FfP research: redoubts for export services of designated mineralogical/agricultural products to the European World/overseas. There are no indications, whatsoever, that any of these countries has found it difficult to fulfil its principal obligations on this accord – not the genocidal and kakistocratic Nigeria, no. 14 on the failed index, not the Democratic Republic of the Congo (no. 4), not the Sudan (no. 3), not even Chad, the no. 2 worst state. This is the context that that seemingly contradictory aphorism, “Africa works”, becomes hugely intelligible. In effect, the raison d’être of the “state” in Africa is not really to serve its people(s); it is, on the contrary, to respond, unfailingly, to the objective needs of its creators overseas.

It would therefore be surprising if the Fund for Peace did not soon have to investigate this “missing link” component in its annual study.

Labels: berlin-state of dysfunction, fund for peace, raison d’être of the state in Africa