ON FRIDAY 10 August 2018, news comes through of the overnight stunning success of the great Save-a-Soul Quintet of Biafran school girls from Regina Pacis Secondary School,  Onicha, southwest Biafra, winning the 2018 global technovation contest held in San Jose, United States. Fifty million Biafrans at home and in the diaspora are catapaulted into a weekend of celebration as the Regina Pacis whiz kids Promise Nnalue, Vivian Okoye, Adaeze Onuigbo, Jessica Osita, and Nwabuaku Ossai became latest icons in the 52 years of the Biafra freedom movement.

Across the wall, in genocidist lair Nigeria, the news from San Jose is crushingly depressing … The state, as usual, is thrown into a frenzy as it decides what to do… how to react to yet another uplifting news feature on/about Biafra and Biafrans. As in the past, genocidist planners would come up with a response, usually more savage than before, in a day or two, a few days, but surely within a week…

ON FRIDAY 17 August in Owere, east Biafra, 50 miles away from Onicha, 2000 Igbo women embark on a peaceful freedom march. As the marchers approach the Owere city centre, a genocidist police detachment opens fire on them. Details of casualties and possible fatalities suffered by the women are still unknown but the génocidaires detained scores of survivors of the shooting for four days before they were released due to a follow up unrelenting campaign by the Biafran population. 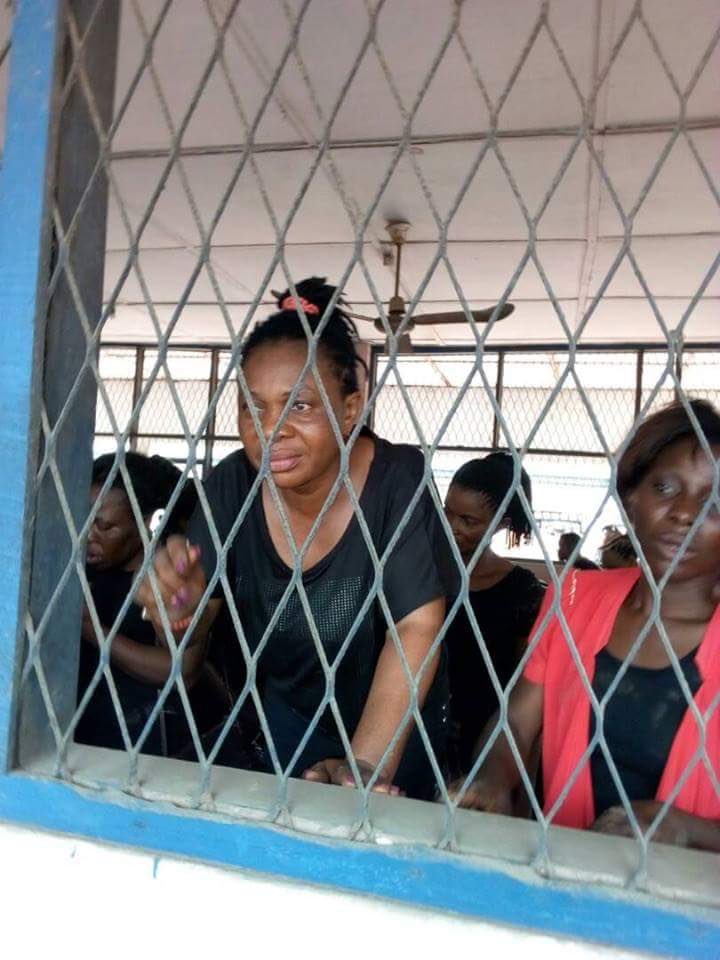 AT the crux of this unparalled savagery by genocidist Nigeria, this malebogle, this poorest country on earth presently (according to the World Bank, https://twitter.com/spectatorindex/status/1031088319654842369), is the engaging, crippling consequence of its genocide against Igbo people which has gone on since its launch date on 29 May 1966. Nigeria murdered 3.1 million Igbo during phases I-III of the genocide, 29 May 1966-12 January 1970, and tens of thousands of additional Igbo subsequently, phase-IV, 13 January 1970-present day…

Precisely, Nigeria has indeed collapsed as a state with few prospects for the future. Despite 52 years of genocide it has waged on the Igbo, including its 44 devastating months of comprehensive siege of Biafra by air, land and sea, 29 May 1966-

12 January 197o, Igbo people have demonstrated a greater creative drive towards constructing an advanced civilisation in Biafra than what Nigeria has all but wishes it could achieve in the past five decades.

THIS is the haunting legacy that Nigeria presents to Theresa May, prime minister of its Igbo genocide co-genocidist and suzerain state Britain, who arrives there tomorrow, Wednesday 29 August, for a fleeting visit.

Posted by Herbert Ekwe-Ekwe at 06:16 No comments:

As the world watches this genocidist state implode... BRITAIN creates a predatory estate it calls Nigeria, a name concocted cavalierly from one of the derivatives of the racist, dehumanising pan-European-crafted “n*****” epithet with edited part of word “area” added on to emphasise the conquered African peoples’ domicility.

It then employs an equally predatory and expansionist African-based Fulani islamists/jihadists, originally from Futa Djallon highlands in contemporary Guinea-Conakry, 1500 miles to the northwest, to murder indigenous uncompromisingly republican Igbo people at will in this longest and most devastating genocide of contemporary history – with 3.1 million Igbo murdered, 29 May 1966-12 January 1970, and tens of thousands of additional Igbo murdered, 13 January 1970-present day...

Just three days ago, Friday 17 August 2018, a Nigeria genocidist ocupation police unit in Owere, east Biafra, opened fire at 2000 Igbo women engaged in a peaceful freedom march through the Owere city centre. Details of casualties and possible fatalities suffered by the women are still unknown but the génocidaires have detained scores of survivors of this shooting.

IT should be noted that, in shooting at Igbo women freedom marchers last Friday, the Nigerians have studiously borrowed a leaf  out of the book of their co-genocidist British conqueror state whose own occupation forces had, in November-December 1929, fired on and murdered 55 Igbo women freedom marchers in this same east Biafra region, opposed to the British conquest
(https://re-thinkingafrica.blogspot.com/2017/11/blog-post_23.html).

For the Igbo, the resistance and overcoming from Nigeria are undoubtedly existential. Clearly, the Igbo are the authors of their freedom which, thankfully, 52 years later, is on the cards.

IGBO FREEDOM from this haematophagous monster, presently in its death throes, is the great African story of the 21st century.

Posted by Herbert Ekwe-Ekwe at 14:13 No comments:

Africa’s most influential and celebrated poet 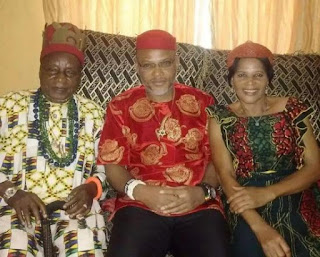 (Nnamdi Kanu and his loving parents)

TODAY marks 11 months or 330 days since the 14 September 2017 genocidist Nigeria military, led by Fulani islamist/ jihadists under Muhammadu Buhari, stormed the home of Nnamdi Kanu’s parents at Afaraukwu-Ibeku, eastcentral Biafra. Consequently, the whereabouts of Nnamdi Kanu, the leader of the Indigenous People of Biafra (constituted integrally in the Biafra freedom movement), and his parents, remain unknown. Scores of the Kanus’ relatives and friends were murdered during the assault and scores of others are still unaccounted for.

Three thousand Igbo people have been murdered across Biafra since Buhari, who, in March 2015, was imposed on Nigeria as head of regime by ex-United States President Barack Hussein Obama (first African-descent president of the US republic in 233 years of existence) and ex-British Prime Minister David Cameron, embarked on this bloodiest track of phase-IV of the Igbo genocide (13 January 1970-present day) in November 2015. After eight years in the White House and 19 months since he left office, Obama now presents an abominable presidential legacy, not lost particularly on African World reckoning, of zealously supporting the Igbo genocide, foundational genocide of post-(European)conquest Africa, executed on the ground by Nigeria, an islamist-led state, and its suzerain state Britain.
(http://re-thinkingafrica.blogspot.com/2017/05/on-30-march-2016-i-published-essay.html)

GENOCIDIST Nigeria has murdered more Africans in Biafra, southwestcentral Africa, since 1945 (Igbo pogrom in Jos, northcentral Nigeria) than the total number of Africans murdered in Africa since 1900 by all of Europe’s conqueror-powers in Africa: Britain, Belgium, France, Germany, Portugal, Spain – including the number of Africans the Germans murdered in the genocide of the Herero, Nama and Berg Damara peoples of southwest Africa, 1904-1907.  Nigeria now rates a not-too-distant second to Belgian King Leopold II’s notorious position as lead génocidaire of African peoples since the 19th century in the Leopold II/Belgian state’s genocide against Africans in the central regions of the Congo River basin, 1878-1908, murdering 13 million of them (Isidore Ndaywel è Nziem, Histoire générale du Congo: De l'héritage ancien à la République Démocratique. Paris: Duculot, 1998, p. 344).

Nigeria surely knows that it will account for the safety of Nnamdi Kanu and his parents and take full responsibility for the consequences of that savage raid on a family home.

A TEAM of five teenage girls from the Regina Pacis Secondary School Onicha, southwest Biafra, has won the gold medal in the junior division finalists of the 2018 global technovation contest held in San Jose, United States.

The students are Promise Nnalue, Vivian Okoye, Adaeze Onuigbo, Jessica Osita, and Nwabuaku Ossai. Their team, Save-a-Soul, came top in the competition involving 9,000 girls from across 115 countries with their developed app, FD-Detector, which tackles fake pharmaceutical products in southwestcentral region of Africa.

THE Save-a-Soul team had travelled to the US with their teacher and mentor, Uchenna Onwuameagbu-Ugwu, and beaten the group of 12 teams’ finalists which included the US, China and Spain to clinch their gold.

Posted by Herbert Ekwe-Ekwe at 11:26 No comments: