Compelling lessons for African peoples in this April month of genocide awareness and prevention ... The European World conquest of Africa is at once a genocide campaign and brigandage – Belgium, Germany and Britain’s relay-genocides-race of first half of 20th century Africa: Herero, Nama, Derg Damara, Igbo THE state in Africa, as presently constituted, can only lead Africans to perdition.

The European World “abandoned” a toxic waste that goes by the name “state” in Africa and Africans, themselves, must get rid of it to survive. African peoples, just as others across the world, are in the position to construct organic state forms that are responsive to their worldviews and progress.

The state is a transient relationship that exists at the behest of the goodwill and aspirations of its constituent people or peoples. If the logic of its existence is to murder and pulverise, it is impossible to see any prospect for its future. Does a Nigeria, for instance, realistically see any future of meaningful development in the wake of the Igbo genocide, in these past 53 years? After murdering 3.1 million Igbo people and tens of thousands additional Igbo since 29 May 1966? Definitely, definitively, no.

It is therefore a dreadful proposition to conceptualise any progress of human or other lives in a genocide state – the likes of Nigeria, the Sudan, the Congo … or whatever their ghastly signatures denote. These are contraptions of murder and murdering; nothing else, as the salient features of this history demonstrate:

IN OCTOBER 1904, Lother von Trotha (pictured above), the general officer commanding the genocidist German military forces engaged in the genocide of the Herero, Nama and Derg Damara peoples of southwest Africa (contemporary Namibia) issued the following proclamation which he unambiguously captioned an “Extermination Order”: “The Herero people will have to leave the country. Otherwise I shall force them to do so by means of guns … [E]very Herero, whether found armed or unarmed, with or without cattle, will be shot. I shall not accept any more women and children. I shall drive them back to their people – otherwise I shall order shots to be fired at them. These are my orders to the Herero people” (Horst Drechsler, “Let Us Die Fighting”: The Struggle of the Herero and Nama against German Imperialism, 1884-1915, London: Zed, 1980: 156-157).

(2)  1904-1907: In this German state-organised genocide of Nama people, supervised by Lother von Trotha, the Germans murdered 10,000 Nama during the period  – i.e., 50 per cent of the total Nama population was wiped out

(3)  1904-1907: In this German state-organised genocide of Berg Damara people, supervised by Lother von Trotha, the Germans do not have the original population figure for the Berg Damara at the onset of the genocide, but, according to their own estimates, the genocidists may have wiped out 30 per cent of the total Berg Damara population by 1907

LEST WE FORGET, Germany had duly received the lead European-World powers’ instituted relay-genocides-in-Africa race baton from none other than Leopold II (pictured above), first cousin of Queen Victoria of England, grandson of  King Louis Philippe of France, and second king of the Belgians. It was now evident, if ever there were any doubts, that the European World-conqueror/conquest state in Africa, the “Berlin-state”, right from the outset, in the wake of the infamous November 1884-February 1885 Berlin conference, was at once an occupying and genocide state. During the course of 30 years, 1878-1908, genocidist Leopold II-led Belgian monarchy/state carried out the genocide of a host of constituent peoples in the  River basin of central Africa (2,442,240 sq km landmass, 80 times the size of ). Leopold II and the Belgian state murdered 13 million African constituent peoples (Isidore Ndaywel  è Nziem, Histoire générale du Congo: De l'héritage ancien à la République Démocratique, Paris: Duculot, 1998: 344). The génocidaire Belgian king was adamant why he supervised this long-stretched genocide, equally obsessed, as his other European league of conquerors,  with Belgium’s own share of the conquest and occupation of Africa: “I do not want to risk … losing a fine chance to secure for ourselves a slice of this magnificent African cake” (Adam Hochschild, King Leopold’s Ghost, Boston: Houghton Mifflin Harcourt, 1999: 58). 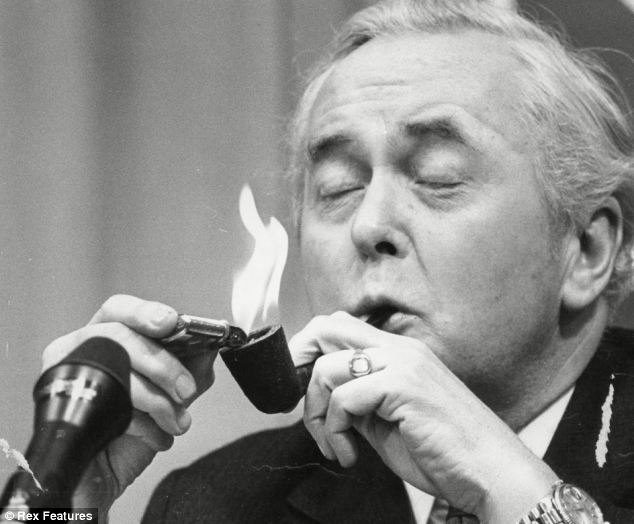 JUST OVER 60 YEARS to the day after German genocidist general von Throta’s “Extermination Order” to destroy the Herero, Nama and Berg Damara peoples of southwest Africa, Britain, occupying the prized lands of southwestcentral Africa 2200 miles away in the wake of the Berlin conference, took over the baton of the European World relay-genocides-race in Africa from Germany. In May 1966, Britain, under the prime ministership of Harold Wilson (pictured above), embarked on the genocide of Igbo people. Beginning in the mid-1930s, the Igbo had spearheaded the restoration-of-independence movement for the constituent peoples in British-occupied Nigeria – an agglomeration of states that are a hefty slice indeed of the scrumptious African cake à la Leopold II. Harold Wilson sought to “punish” the Igbo for their historic role.

Instructively, unlike the Belgians and Germans earlier, the British were able to construct a panoply of pan-African nations from north Nigeria (especially Fulani, Kanuri, Nupe, Hausa, Jukun, Bachama, Jawara) and west Nigeria (particularly Yoruba, Urhobo, Edo) to directly execute this genocide against an African people on the ground, on its behalf. But the actual operationalising mission itself could easily have been taken directly from von Throta’s “Extermination Order”.

FOR Britain, its eminent position in Africa (and the rest of the world) during this epoch could not be overstated. Having remained the lead beneficiary of 400 years of the pan-European World enslavement of African peoples since the latter part of the 17th century (Herbert Ekwe-Ekwe, Readings from Reading: Essays on African Politics, Genocide, Literature, Reading and Dakar: African Renaissance, 2011: 1-6), it had now become the European World premier power in Africa after being part of the victorious US-led alliance that defeated its German global-domination rivals twice in the essentially intra-European wars of 1914-1918 (so-called World War I) and 1939-1945 (so-called World War II).

Such was the sheer impudence of Harold Wilson as he oversaw the slaughter of the Igbo from his 10 Downing Street London official residence,  particularly in the catastrophic months of 1968-1969, that he went on record to inform Clyde Ferguson, the United States state department special coordinator for relief to Biafra, that he, Harold Wilson, “would accept a half million dead Biafrans if that was what it took” Nigeria to destroy the Igbo resistance to the genocide (Roger Morris, Uncertain Greatness: Henry Kissinger and American Foreign Policy, London & New York: Quartet Books, 1977: 122). Few would fail to note the  grotesquely expressed diminution of African life made by a supposedly leading politician of the world of the 1960s – barely 20 years after the deplorable perpetration of the Jewish genocide in Europe. Besides, Britain was a key participant in the drafting of the crucial 1948 UN convention on the crime of genocide, 18 years before it launched the Igbo genocide, and one of its early signatories. Britain and its pan-African allies eventually murdered 3.1 million Igbo, 25 per cent of this nation’s population, during phases I-III of the genocide, 29 May-12 January 1970, and an additional count of tens of thousands of Igbo murdered in phase-IV of the genocide, 13 January 1970-present day.

AS THE final tally of the murder of the Igbo people demonstrates, Harold Wilson probably had the perverted satisfaction of having his Nigerian co-genocidists perform far in excess of the prime minister’s grim target, a subject coldly stated in Wilson’s own memoirs where he notes that the Nigerian military, equipped zealously by Britain, expended more small arms ammunition in its campaign to achieve its annhilative mission in the Igbo genocide than the amount used by the British armed forces  “during the whole” of  the 1939-1945 war or “World War II” (Harold Wilson, Labour Government, 1964-1970: A Personal Record, London: Wiedenfeld & Nicolson, 1971: 630, added emphasis). On this feature, Robert Scott, military advisor in the British diplomatic mission in Nigeria during the Igbo genocide acknowledges, equally gravely, that as genocidist Nigeria military forces unleashed their attacks on Igbo cities, towns and villages, they were the “best defoliant agent known” (Daily Telegraph, London, 11 January 1970).

SOMEONE or a people who survives genocide is simultaneously a survivor and victor, hence that stunning incantation of the triumph of life itself on the morrow of overcoming the slaughter, the dehumanisation, the immiseration: “Happy Survival”!

The Derg Damara, Herero, Igbo and Nama are great survivors and victors – and precisely because of these outcomes, these peoples will play a critical role in charting the very nature of the future relationship of Africa and Belgium, Africa and Germany, Africa and Britain, and Africa and the rest of the European World.

The perpetrators of these genocides, Belgium, Britain and Germany, must acknowledge and atone, fully, for executing these crimes against humanity. Belgium, Germany and Britain must each pay comprehensive reparations at once to the host of constituent African peoples in the Congo River basin, Derg Damara, Herero, Nama and Igbo peoples, respectively, for committing this stretch of genocides between 1878 and 2018.

THESE crimes will never be forgotten by the survivors and the rest of the world. This is the proclamation that surely endures and not General von Trotha’s “Extermination Order”.

References
Drechsler, Horst. “Let Us Die Fighting”: The Struggle of the Herero and Nama against German Imperialism, 1884-1915. London: Zed, 1980.